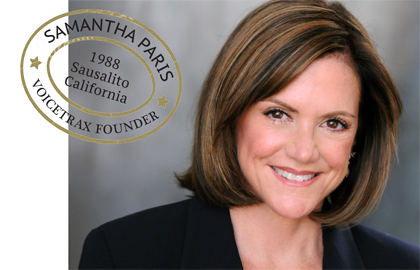 We are nothing without our dreams…

Samantha Paris is a multiple award-winning voice actor, acclaimed educator, entrepreneur and author of “Finding the Bunny: The secrets of America’s most influential and invisible art revealed through the struggles of one woman’s journey” (Voice Haven Productions, 2018). Her memoir was optioned in 2019 by Warner Brothers for development into a television series.

Since establishing Voicetrax in 1988, Samantha has trained more than 10,000 aspiring and working voice actors in the San Francisco Bay Area, Southern California, and now, from all over the world, thanks to Zoom conferencing and other forms of technology. Samantha’s greatest passion is helping others find their true voices and realize their dreams through voice acting.

Samantha’s own single-minded dream of becoming an actress began as a little girl growing up in Southern California, under her given name, Bobbi Block. She began performing at the age of five, and took her first voice-over class at age fifteen. One year later, she landed an agent and thrillingly so, saw her fervent dreams take flight. Over the next twelve years, Samantha enjoyed a career that included over 1,000 national and regional commercials, roles in nearly 200 half-hour animated television cartoon shows, including the mega-hit cult series, Jem and the Holograms. She landed several leading appearances in episodic television and a starring role in the ABC After School Special, I Think I’m Having A Baby. She also had the distinct honor of starring with Michael Landon in a two-episode story line on Highway To Heaven.

But with all of her career success, including three Clio Awards, there was a voice inside Samantha telling her there had to be something more, though she couldn’t put her finger on exactly what that something more was. The only thing she knew for sure was that she had one major dream still unanswered: to live near the Golden Gate Bridge. Going purely on instinct and with no specific plan in place, she moved to the Bay Area in 1988 and bought a home in Mill Valley. Shortly thereafter, Samantha was unwittingly thrust into the teaching profession, giving voice-over lessons to budding voice actors—first one, then two, and then before she knew it, there were 30, then 40 students!

And so, Voicetrax San Francisco was formed one year later. The media world quickly caught on to what Samantha was doing, and featured her widely in media outlets throughout Northern California, including all major newspapers, the hugely popular Ronn Owens radio show (several appearances) and local television programs. In what seemed like the blink of an eye, students were multiplying and quite unexpectedly to her, Samantha had unconsciously created a groundbreaking training program and a flourishing business. By the time that the San Francisco Chronicle deemed her “the most successful voiceover coach in the Bay Area,” the Voicetrax San Francisco studio, built in 1992, was located in Sausalito, just minutes away from her beloved Golden Gate Bridge.

Beginning in 2002, Samantha successfully ran Voicetrax Desert Cities in Rancho Mirage, California, where she trained aspiring and working voice actors. For personal reasons—and with enormous difficulty given her love for and dedication to her desert-based students—she eventually decided to close the school in 2005, thus ending her monthly commute between the Bay Area and the Coachella Valley. However, in 2020, the pandemic caused her to return to the desert full-time to shelter in place, which gave Samantha a second opportunity to bring voice acting training back to the Greater Palm Springs area in full force. She has since resumed working with former students and new ones—which is even more accessible now thanks to video conferencing and technological advances in the voice-over field in general.

Now, more than three decades later, Voicetrax stands out as the largest, most comprehensive and respected voice-over academy in the United States. With a rotating curriculum of nearly 100 different courses of study, Samantha and her distinguished team of guest directors help each student accomplish their unique goals.

Voicetrax students come from all walks of life, backgrounds and interests – many of whom have gone on to book voice-over jobs regularly to supplement their incomes, and many others who go on to make voice-over their full-time (and handsome) living. In addition to the outstanding training that students get at Voicetrax, they also experience an extraordinary sense of community, camaraderie and support in this unique haven for voice actors.

With a fierce commitment to the philosophy that talent can be taught, Samantha built her hugely successful business strictly through enthusiastic word of mouth, substantial media attention and satisfied, longstanding voice acting students. Above all, through Voicetrax, Samantha has helped transform the lives of thousands through her one-of-a-kind approach to teaching and coaching. And through this gratifying process, Samantha has ultimately realized her own deepest dreams and the ultimate satisfaction as an artist.

To learn more about Samantha’s journey, read her memoir, “Finding The Bunny – The secrets of America’s most influential and invisible art revealed through the struggles of one woman’s journey.” You’ll discover why Warner Brothers has found Samantha’s life story, intertwined with her life-changing work with Voicetrax students fascinating enough to bring it to the screen.

We invite you to become part of the story and explore the world of voice acting!