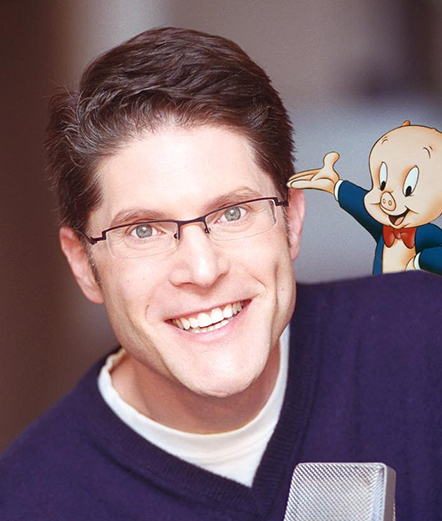 One telephone book over the shoulder, two. Three. Finally, on the TWELFTH phone book, paydirt: Mel Blanc’s phone number! At all of five years old, BOB BERGEN was warned by his mother, “you can’t be Porky Pig, you’re Jewish!” But that didn’t stop him at a less-tender 14 years old – not from calling Mel Blanc, not from crashing a recording session pretending to be Blanc’s assistant, not from watching Blanc’s legendary prowess in action, not from realizing he needed training and for his voice to change! Two years of Meisner conservatory, three years of improv study with the Groundlings, working with just about every LA voice-over coach known to man, and PRESTO: an agent at 18 years old to get after his dream, and a tour guide job at Universal Studios to put food on the table. And what a dream: 2020 will mark Bob’s 30th straight year as Porky Pig! To say nothing of his work in features like Despicable Me 3, Wreck It Ralph, The Secret Life of Pets, just about every Pixar feature, and even “Luke Skywalker” in Robot Chicken! We could spend hours covering his credits; instead, let it suffice to say that Bob is one of the most in-demand voice-over coaches in the entire industry.